Waiting, after all, is worth it: Our first album Songs about waiting is finally ready. We recorded it at Tinitus-Studio in Nuremberg with Markus Kühn who worked meticulously with keen sense for our sound. The CD has been officially released on April 19th by Skycap Records (Münster). Triton, Berlin, has taken over the promotion. You can order the CD directly from us, from Scycap Records or at Amazon. Some first feedbacks: „More than successful.“, „Softens the heart…“, „Just lovely.“ You can listen to some samples here.

What’s the deal with the whale?

If you’ve seen us live, you may already know: „The maritime riddle will be revealed on stage as we’ll throw a spotlight on it from all possible (and impossible) angles. Curious? Have a look at our biography. 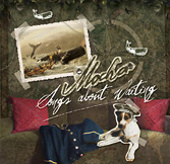